Since she was leaving for college in a few weeks (though Mom, Dad, and I were largely still in denial about it), I decided to take Bird with me to visit the Engineer’s family on the peninsula.  She’d never seen it before, and she wanted to meet his dog, so we went up for a few days.

The first evening, we went down to Salt Creek, one of my favorite places in the world.  As we walked along the beach where the river ran down to the ocean, we noticed an…odor.  The Engineer commented that it smelled like low tide, then added, “Oh.  Or it’s that.”

That was a dead sea lion.  It had been washed up long enough that its ribs and vertebrae were starting to show and the fur was beginning to slough off its skin (I’d forgotten that sea lions had fur, actually).  As we edged around it, Bird, future veterinarian that she is, said, “Aw, it’s cute!”  The Engineer and I did not exactly agree, but at least Bird’s curiosity didn’t let the dead animal ruin the evening.

We walked along (now suspicious of every pile of kelp lest it contain another dead animal), climbed some rocks, and watched the sun set over the water.

After some car troubles, we made it up to Olympic National Park.  The road up to Hurricane Ridge involves a lot of winding turns and a few tunnels hugging the side of the mountain.  At the visitor center, we saw a few marmots in a meadow and an utterly complacent deer sauntering through the parking lot.  Not wanting to stay too long since we had borrowed the Engineer’s mom’s car, we headed up one of the short trails, a 1.5 mile loop that promised “spectacular views.”

As we climbed, we saw a doe grazing on the hillside below us – then noticed her two adorable fawns!  Farther on, a brown shape scurried across the trail, eliciting a yelp of, “Marmot!” from Bird.

“That’s a grouse,” the Engineer said.  I noticed movement at the foot of a nearby bush.  The grouse had a chick with her, a fluffy, energetic chick that seemed to ignore all of its mother’s cackles that probably meant, “Get over here this second or I swear I will feed you to those humans myself.”  Kids, right?

At the top of the trail…well, the view did not disappoint. 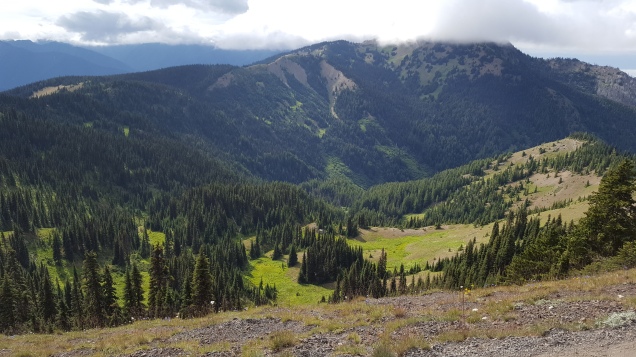 Since we seem to make this hike nearly every time I visit the Engineer’s family, we had to visit Marymere Falls before we left.  The trail winds through the forest to find the creek, where you can wade straight into the water from a wide gravel shore. 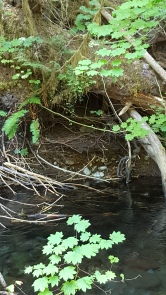 Bird pointed to a natural, miniature harbor and said, “That’s where Ratty ties up his boat, and he and Mole can get up to their house through that tunnel in the bank, there.”  We discussed the logistics of hiding the canoe from humans, and where Badger’s house might be (further up in the woods, we decided), baffling the Engineer, who had never read The Wind in the Willows.  (Though he’s quite used to me pointing to little holes in tree trunks and insisting that fairies and elves must live there, so we probably didn’t sound too absurd.)

After crossing two bridges over the creek and its tributary, the trail turns steep.  We led Bird up to the higher vantage point first, then followed the loop down to where you can look up at the full height of the falls.  The Engineer and I slipped past the railing and climbed down to the pool at the base of the waterfall. 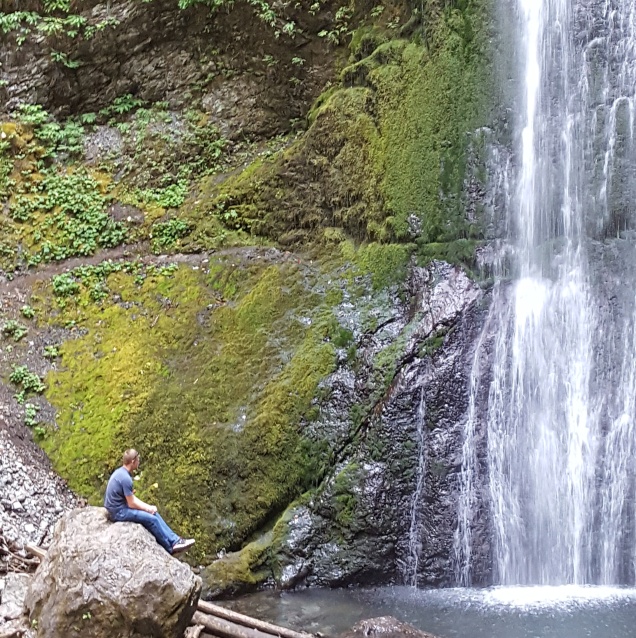 Once we’d made it back down the trail, we decided to go for ice cream at Granny’s Cafe, where we met a 12-toed cat!

So there you have it, dear readers: proof that Bird and I do, occasionally, go outside and enjoy ourselves.