I can divide up my life by books: epochs of reading indicated by the particular volume that served as my security blanket, my favorite refuge, for that period.  These are the formative few that found me at exactly the moment I needed them.

The W-Z shelf in my elementary school library formed a corner with another, lower shelf that, when I settled criss-cross onto the nubbly carpet, made me feel safe – walled up in a castle.  The books at eye level when I situated myself this way included Angelfish, which I checked out so many times throughout the years at St. C’s that the librarian gave me that copy as a graduation present at the end of 8th grade.  She said it was clearly mine.  I called it my Belle book, after the scene in Disney’s Beauty and the Beast when the bookseller gives Belle her favorite book free of charge.  The reason I read it 17 times in a single year is that Angelfish is a love story about a girl and dance.  Robin, the narrator, loves ballet so much she declares she will always find some way to be a part of it, even if it means just sweeping the stage.  “That’s the way you love something when you’re young,” her teacher responds.  The plot involves Robin helping a victim of the Chinese Revolution rediscover his own art – originally dance as well, now painting – and reaffirm the value of having that joy in one’s life.  Having quit my own ballet lessons years before, I probably couldn’t have told you in 8th grade why I loved this book so much.  Now I think I needed it to give me an example of how to hold on to your passion despite the naysayers.

2. Dealing With Dragons by Patricia Wrede

This must have been one of my first feminist books.  The stubborn, witty heroine, Cimorene, gets bored being a princess, so she runs away to serve a dragon.  Although irritated by the conventions that bind her (dealing with all those princes trying to rescue her against her will, for instance), Cimorene also frequently uses her society’s stereotypes of silly princesses to her own advantage (e.g., getting an evil wizard to let slip a few details of his plan).  She finds a way of life that makes her happy and fulfilled even though few people originally understand her desires.  Beyond the quips and amusing dialogue that appealed to me as a sarcastic teenager, Dragons showed me that if you persist in chasing your dreams, you’ll find people who will listen to you.  The dragon she serves, for instance, believes Cimorene when everyone else wants to write her off as just another hysterical princess.  Plus there’s swordfighting.  Who doesn’t love swordfighting?

I gave up reading anything but religious books for Lent one year, and it led me to this memoir of a Jewish girl turned Episcopalian.  Nearly every page held a turn of phrase that made me think, “Yes, exactly,” or “I thought that was just me!”  In a section on Lent, the author’s priest asks her to give up reading for the liturgical season, and I nearly dropped the book in surprise.  I just saw so much of myself and my own questions and confusion about faith (and life in general) in this book, even though I was raised Catholic and intend to remain in the Church.  I love the honesty about the difficult parts of belief and the self-awareness the author demonstrates in her writing.  Once I finished the book, I immediately turned to the first page again, this time with a pencil to underline and annotate the parts that spoke to me the most.  Since then, I’ve read it nearly a dozen times, at least once a year, each time making new notes and looking back on my past self’s questions and scribbles about faith and life.

4. The Disreputable History of Frankie Landau-Banks by E. Lockhart 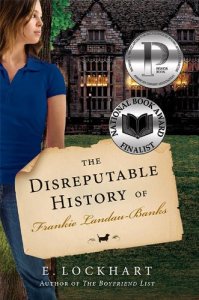 Frankie does not get the guy.  Her friends and family don’t accept her as she is.  But that’s not the point.  When I started high school, I could identify with Frankie’s sense of confinement within others’ perceptions of her.  Her family doesn’t deem her smart enough to use her cell phone when she gets lost or attend a prestigious boarding school without a nice boyfriend to “look after her.”  The boyfriend is not much better; although most of Frankie’s schemes are designed to earn his respect, she soon discovers that he preferred it when she was arm candy in need of his protection.  But she keeps going, realizing that she actually wants to prove something to herself more than to her boyfriend.  After that, others’ opinions don’t matter so much.  By the end, no one quite knows what to do with Frankie, except Frankie herself.  In my freshman year of high school, when I discovered this book, I had just been frozen out by the group of girls I used to rely on for approval.  I needed the self-discovery role model that Frankie provides.  And I needed the honesty of the last chapter: “She might go crazy…They do sometimes go crazy, these people, because the world is telling them not to want the things they want…another possibility – the possibility I hold out for – is that Frankie Landau-Banks will open the doors she is trying to get through.  And she will grow up to change the world.”

2 thoughts on “My Life in Books, Part 1: The Formative Favorites”