They say you don’t have assigned seats in college, but everyone knows that’s a lie.  After the second or third class of the semester, no one wants to move.  The class has shifted around briefly and is now settled into a comfortable arrangement of friend groups and varying degrees of attentiveness.  Why mess with it?

But she did.  One day, midway through the semester, I walked into my global lit class to discover that some girl was in my seat.

I didn’t even know she was in the class, meaning she’d been in the back up until that day.  She glanced up to meet my glare, then quickly looked back down at her phone.  My friends had all moved down one seat in the row so there was still space for me, but as I slid into place, J. leaned over and hissed, “I don’t like this.”

“This angle is throwing me off,” A. agreed, nodding at the whiteboard.  Even the subtle shift of a few inches to the right had thrown off our entire groove for the class.

Now, I realize this sounds somewhat petty.  We are, after all, voting adults.  Can we not just take Elsa’s advice and let it go?  It’s just a chair.

Well, I got to the next class ridiculously early , so I sat in my normal spot.  When Miss Seat Stealer waltzed in, she did a double take, glared at me, then slid into the seat next to mine with a stage whispered, “I guess I’ll just have to take Charlotte’s seat,” to her friend, who shrugged and sat down without complaint.

So I’m not the only childish one in this tale.

I’m a creature of habit.  The uncertain hovering on the edge of a classroom, wondering which row to sit in and which friends will be within reach for in-class discussion, should be reserved for the first, maybe the second, week of classes.  We’re all outsiders for those first couple of days, until the class gels.  After that, it’s a domino effect: if one person moves, the person whose seat was stolen must now occupy someone else’s seat, displacing yet another person to someone else’s chosen spot, and so on until the whole class feels as awkward and uncomfortable as the first day they walked in.  Each person temporarily becomes an outsider again as they wonder where on earth to sit.  And we are too far into the semester to justify that feeling!

Now, if you’ll excuse me, I need to get to class a little early.  That seat is mine. 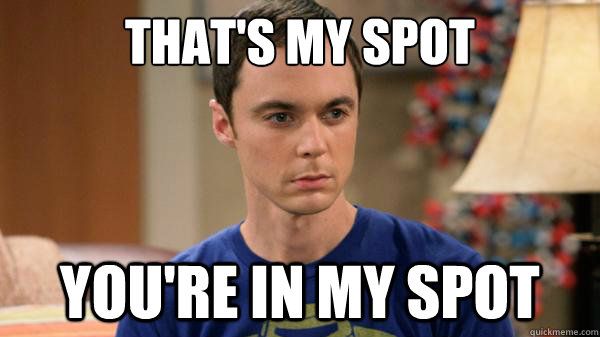 2 thoughts on “Don’t Steal My Spot”